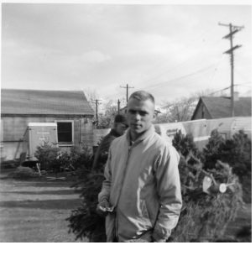 Gene Averill is considered a leading pioneer in the demand management software industry. During his service in the military he demonstrated outstanding skill in math which led him to acquire invaluable supply chain expertise.

He developed the world's first automated supply chain planning software. And with more than 40 years of experience he was the head developer at Avercast until he passed away in January of 2018.

​He understood the need, the problem he was solving, and then he wrote the system to fit the need.

Our story began in 1959 when our founder Gene Averill joined the Marine Corps at the age of 17.  He was assigned to serve in the Vietnam war as a young artillery officer.

America has never fought a war without the help of allies. However,  the closest ally in the Vietnam war was Japan, found 1500 miles away and across the ocean. In Japan, the US had a major supply chain hub that supplied all of the world efforts in the war. The distance between these two countries presented a tremendous problem.

The American troops in Vietnam were having difficulties with the whole concept of supply chain management. Their manufacturing and logistics process to supply the war efforts had a lot of inefficiencies. Due to lack of management, forecast inaccuracy, and extensive long lead times, the troops in Vietnam began to stock-out of on essential supplies, forcing them to plan out the war efforts differently and scale back in some instances.

While on tour in Vietnam, Gene was commanded to take a plane from Vietnam to Okinawa, Japan. Not knowing exactly why he was being called to Japan, he began the most exciting journey of his life.

Gene was brought to Okinawa Japan to meet with a US military leader who had heard about Gene’s outstanding math abilities. Concerned about the supply chain challenges in Vietnam, the general assigned Gene Averill to solve this problem and eliminate stock outs in Vietnam.

Gene was brought to Japan to solve a forecasting and demand problem. He diligently read every single supply chain book he could get his hands on and successfully implemented a new program that not only got supplies back in stock, but also allowed the troops in Vietnam to forecast better.

Gene gained a lot of recognition and became popular among the people for his ability to supply the American troops efficiently. He also made the General very happy and was later offered a job promotion of his choice.

After serving as an artillery officer and drastically improving the supply chain in Vietnam, his math skills and outstanding work ethic led Gene to begin working for the Defense Logistics Agency in Mechanicsburg, Pennsylvania.

Captain Averill knew that not only demand planning and forecasting were important in supply chain. The execution of the plan also plays an important role in efficient supply chain management. Therefore, he  thought to use the only computer they had as a resource to do the forecasting and generate the numbers, while allowing his team to go out and focus on executing the plan.

A short time later, Captain Gene Averill was sent by the US military to IBM as part of an elite team to study computer science for the purpose of developing the world’s first automated supply chain planning software system to be used exclusively for global US Military operations.

Gene Averill received a lot of recognition during his time in the military. By the time Gene turned 40 years old, he had many offers from private and defense contractors asking him to do the same thing he had done during his time at Defense Logistics Agency, create a large scale supply chain planning system.

In 1982, after 23 years of service to his country, Gene retired as a Lt. Colonel from the USMC with the determination to start a software company that would revolutionize supply chain management.

Over the years the Avercast software product line has received every major accolade offered in the supply chain management industry and has been recognized by such magazines as Supply & Demand Chain Executive, Supply Chain Brain, Food Logistics (among others...) as a top technology provider for supply chains.

To date, Avercast serves large companies such as Kawasaki Engines and Mitsubishi.

Thousands of supply chain management professionals all around the world rely on Gene Averill’s  ​software technologies to keep the right products, in the right place, at the right time.